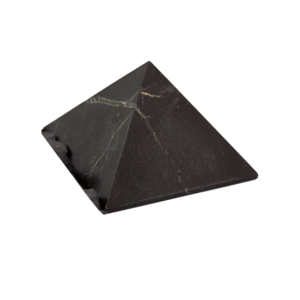 Natural carbon based mineral with qualities of protection from electromagnetic radiation.  A Beautiful addition to your décor with the addition benefits of reducing the damage caused by your mobile devices, Wi-Fi modem systems, computers, smart TV’s and microwave ovens.  This pyramid is 3cm x 3cm compact and beautiful and excellent for your desktop.

MorganGenus Shungite pyramid 3cm x 3cm is made from an ancient rock formation, a natural mineral of unusual composition and structure. It has unique cleansing properties and is extracted in Karelia near the small settlement called Shunga. This item is small and compact ideal for your desk top.
Shungite is a natural mineral with the crystal lattice or grid organized in a certain way, the basis of which is carbon.
Shungite receives its healing power from one of its elements, fullerenes – a globular hollow molecule consisting of several dozens of carbon atoms. When fullerenes, a special molecular formation, were discovered in shungite a few decades ago, it became a sensation. Fullerenes, getting in our body, behave as the most powerful and most long-acting antioxidant as a means to fight free radicals. Today, doctors have great hopes for fullerenes.

This website uses cookies to improve your experience while you navigate through the website. Out of these cookies, the cookies that are categorized as necessary are stored on your browser as they are essential for the working of basic functionalities of the website. We also use third-party cookies that help us analyze and understand how you use this website. These cookies will be stored in your browser only with your consent. You also have the option to opt-out of these cookies. But opting out of some of these cookies may have an effect on your browsing experience.
Necessary Always Enabled
Necessary cookies are absolutely essential for the website to function properly. This category only includes cookies that ensures basic functionalities and security features of the website. These cookies do not store any personal information.
Non-necessary
Any cookies that may not be particularly necessary for the website to function and is used specifically to collect user personal data via analytics, ads, other embedded contents are termed as non-necessary cookies. It is mandatory to procure user consent prior to running these cookies on your website.
SAVE & ACCEPT